Tuesday, the Knights hosted a pair of class A opponents. First up from section 8A were the 16th ranked Crookston Pirates. The Pirates posed an interesting match up as they are closely ranked to the Knights. Last Thursday the same scenario happened with Marshall and the Knights struggled to navigate the waters, thus going down in defeat by a point. All eyes were on WCA/A/B-E to see how they would respond to another similar team...wilt by the wayside or stand up and fight.

The dual began with six points by way of forfeit for the Knights however, Crookston removed the typical scoring ability in the early weights for the home team with three consecutive victories. This found WCA/A/B-E in a hole by way of 13-6. The slope got even slipperier as the Pirates hit high gear by marching out a pair of ranked wrestlers and gathering two pins. The score was looking ugly following 138 lbs as Crookston led 25-6.

Reubens Swanson stopped the bloodshed for the Knights as he picked up a second period pin. Anthony Sykora followed and forced his opponent into a fall. Kade Olson closed the gap to just four points as he beat his man by decision. Jordan Lohse and Beau Robinson gave the Knights the lead and extended it by eight with another pair of pins. #4 ranked @ 182 lb Nathaniel Kisgen of the Knights bumped up to face the formidable #2 ranked @ 195 lb Ethan Boll. It was evident as to why there are weight classes in the sport as the larger Boll gained control of the bout and dispatched his opponent by a major decision, closing the Knights lead to 33-29. Colton Lindquist and Justin Blascyk responded well for the home team as they both owned their matches and won via pin-fall. The dual ended with a Knight victory of 45-29. The 16 point separation answered the question above...The Knights mitigated damage inflicted and controlled the controllables, in doing so they made a statement in regards to competing with similar opponents. They chose to fight.

The second dual of the evening was with the section 5A Benson Braves. Benson holds a handful of tough opponents, most noteworthy is the #1 ranked 195 lber in the state. A sophomore wrecking ball named Thomas Dineen. Dineen is joined by several other quality wrestlers but by the end of the dual attrition showed itself. The Braves were unable to fill five of the 14 weights and they dropped six out of the nine matches wrestled. The Knights overpowered them with ease, 63-14.

Head Coach of the Knights Brandon Gruchow commented on the duals with,”Tonight was a great way to respond to our loss on Thursday. I felt like our guys stepped it up and were really working on the things we spent time on in practice.” 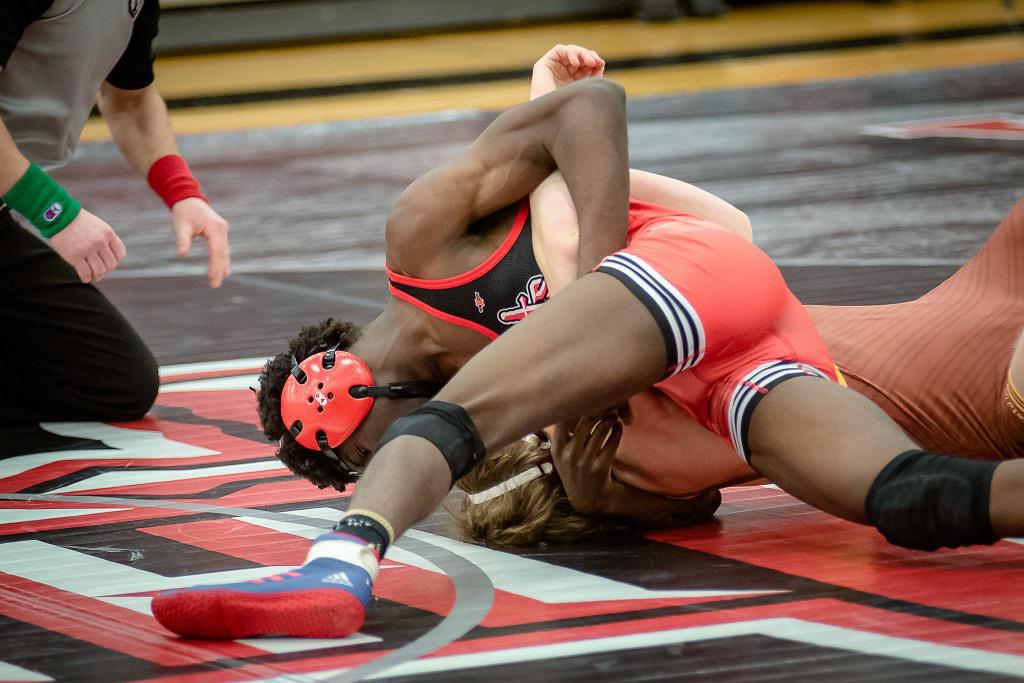 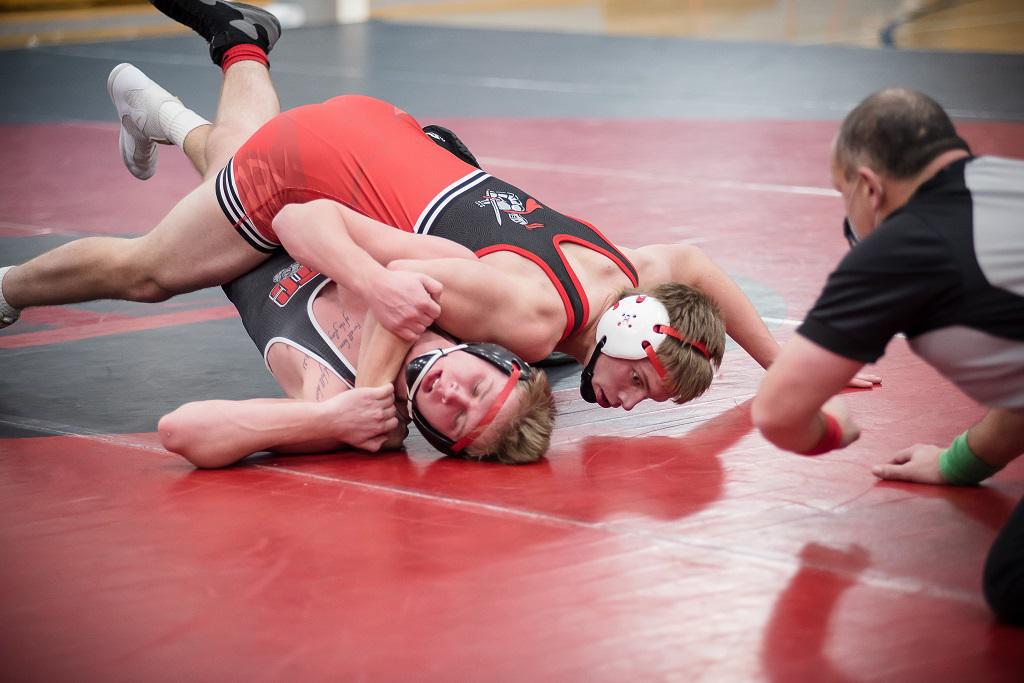 Jordan Lohse with a technical fall of Jaxon Rich of OTC. PHOTO by TAMMIE OLSON PHOTOGRAPHY 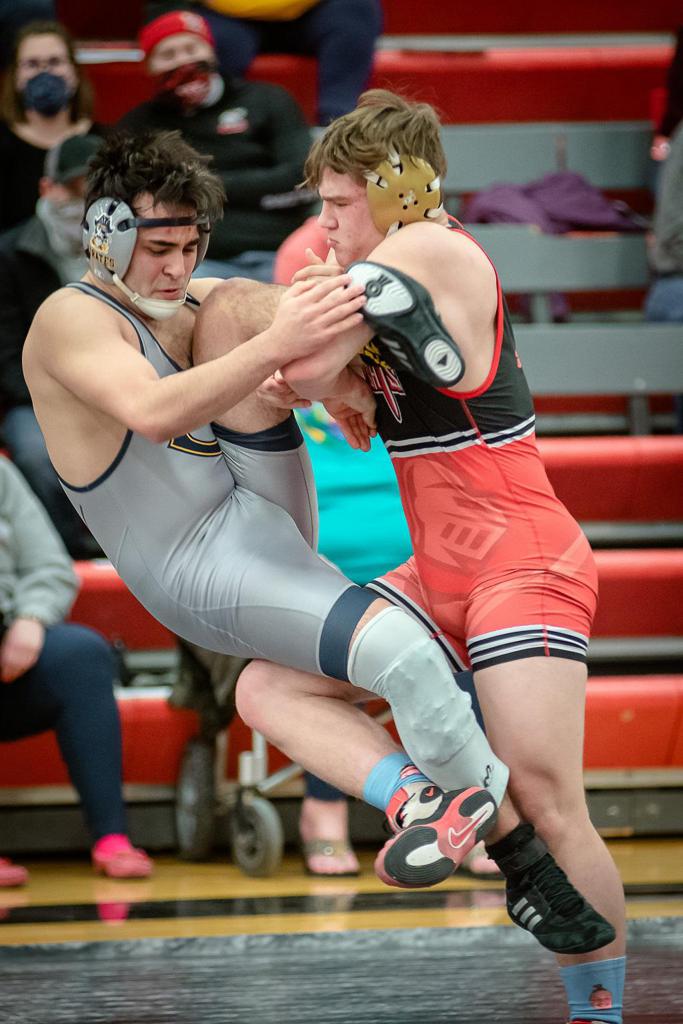 Thursday the team traveled to Battle Lake for an inter conference/section 6A match up with the Ottertail Central Bulldogs. Over the course of time OTC has provided stiff competition for the Knights and the relationship has become as Bulldog head coach Scott Hart put it that night during his senior night announcement riff,“a great rivalry”. On this occasion though the Knights were having none of that. They marched into the Dawg House and took the bark out of the Bulldogs winning 11 of the 14 bouts, all 11 of them with bonus points. The final score was 63-13.

Wrestler of the Week
Reubens Swanson garners this editions honor of Wrestler of the Week. Reubens is in his Junior season for the Knights program. Over time he has moved in and out of the starting lineup for the team but his presence to the program could not have come at a more opportune moment than on Tuesday. With his club’s back against a wall and the score getting out of hand, Reubens athleticism and energy were on full display. His second stanza pin against Crookston halted the Pirates advance and laid the base for a convincing team win. He continued his night with a first period fall in the Benson dual.

WCA/A/B-E will begin the week on the road as they bring their 13-3 record to Wheaton to face the hometown 7-7 Border West Buccaneers and 13-3 Canby Lancers. Thursday the squad returns home to Barrett for a triangular with the 9-7 AA Morris Area Tigers and the 11-5 #4 ranked Minnewaska Area Lakers.